When Disabled Students Are Abused

This is the second in a series of posts about trauma due to criminalization of disabled students by Amy Sequenzia.
Content Warning: ableist slurs, description of abuse. 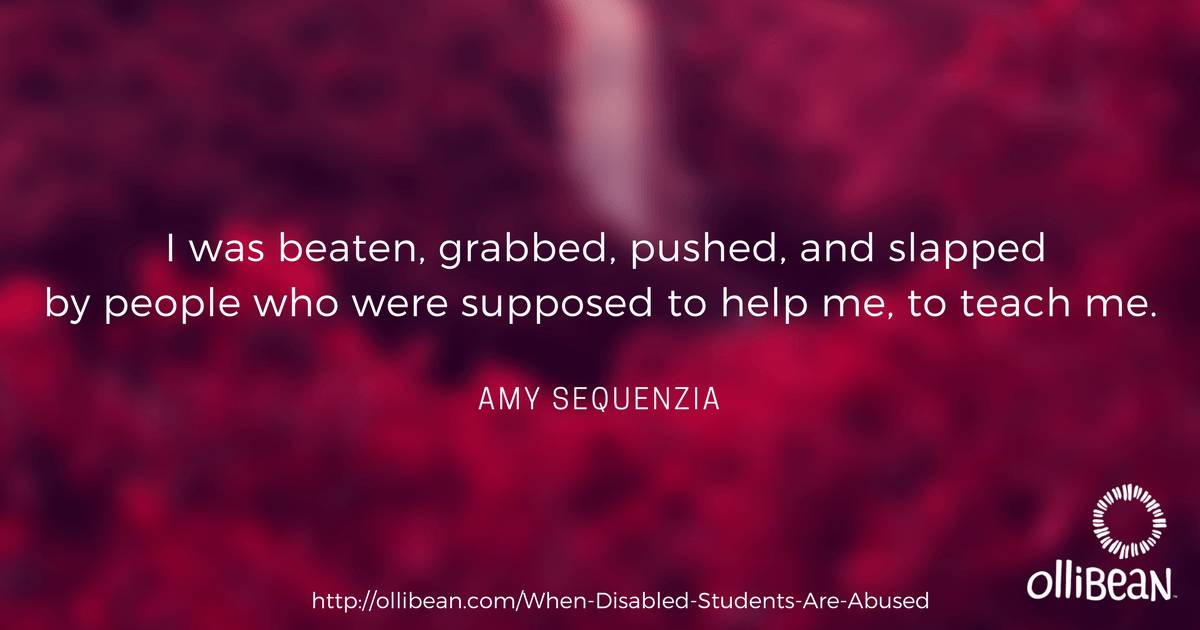 I write this post based on the case linked here, NC Boy With Autism Slapped: Former Teacher Gets Jailtime , and on similar cases that make the news when they happen but after that we don’t hear about the victims. I will tell what happened to me, how I reacted to the abuse, and the lasting trauma that might have gone unnoticed to many.   The case in the link had a better ending than most. The main abuser was arrested (but only got 30 days in jail) and the victim was not criminalized. There are things that we don’t know though.

We don’t know about the other times this kind of abuse happened. The family believes the one time captured in video wasn’t the only one. I am certain it wasn’t. It is NEVER only one time.

We don’t know how the Autistic student is coping with being in school today. The article shows that he was reacting “violently” months after the incident. How is he now? How does he react to stressful situations and how do people react to his reactions?

We don’t know if he internalized the message that if he does not immediately comply with people in position of power, even if his body cannot respond in the way others believe is the right way, he deserves to be assaulted.   If that student is like me, he might have become passive when facing abuse.   As a student, from very young until I was a teenager, I was beaten, grabbed, pushed, slapped by people who were supposed to help me, to teach me. I didn’t react in any way that could be considered violent. I rarely cried. I wasn’t living with my parents when most of these abuses happened, so sometimes they didn’t know. Sometimes I was the only one, besides the abuser, who knew. 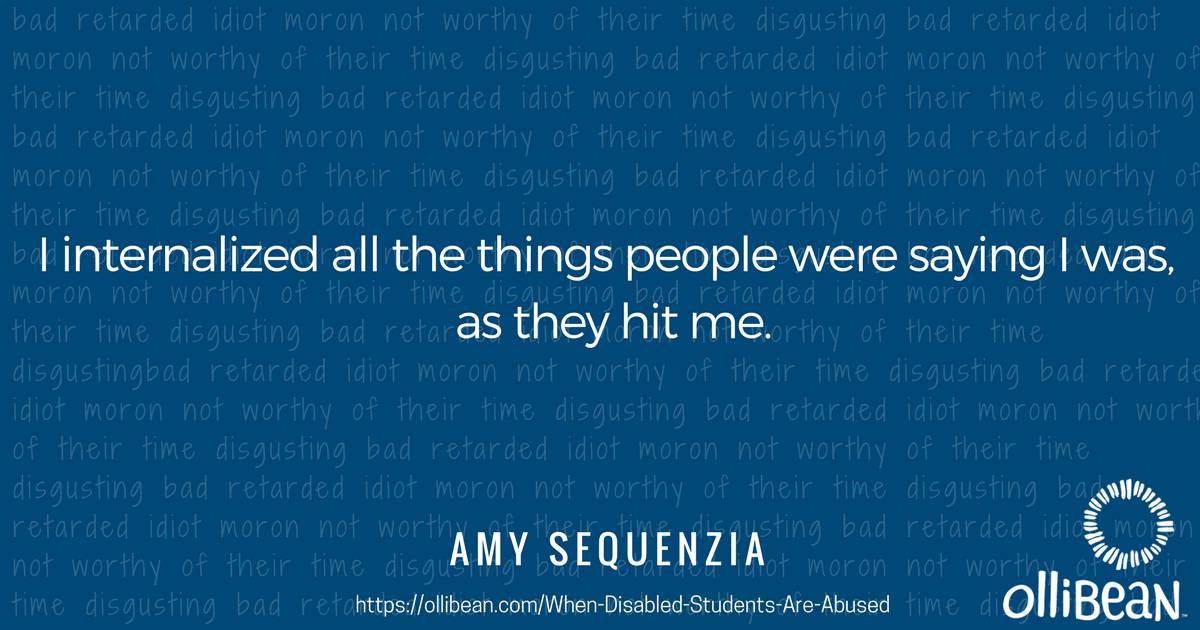 I don’t remember the first time I was abused but that’s when I developed my own “defense mechanism”, which never protected me, but was the only thing I thought I could control.

I internalized all the things people were saying I was – bad, retarded, idiot, moron, not worthy of their time, disgusting – as they hit me.

I started believing I was all that, and I began to expect the abuse from everyone.   My reaction when I met new people (as aides, therapists, teachers) was one of defiance. Not because I wanted them to see me, understand me and respect my way of being. I wasn’t defying them as I might do today – now that I have the supports I need to speak out.   The defiance of a first encounter was one of total no cooperation. I refused to do what was expected of me. People used to say that I was “testing” the new person and, in a way, I was. I wanted to know if I was going to be hit right away. I was attempting to control when I was going to be abused.

I defied with a smile. I was uncooperative, but in a passive way. I smiled because I hoped to be seen as a person, a human being. I smiled a smile of fear.

Even when the people around me were initially patient and understanding, the usual “good people doing good things”, they would sometimes seem to be too close to hitting me. This made me fear them, so I smiled.

Sometimes they would lose their patience AND hit, push me, yell slurs at me. This made me fear them, so I smiled.

The smile didn’t work much. Sometimes it made things worse. But I still smiled.

Sometimes my face didn’t show any reaction. The pushing, the grabbing, the hitting would come with their “frustrations” at my lack of facial expression, because I wasn’t showing how terrified I was, how terrified they wanted me to be.

My self-worth was shattered and I still have this trauma inside of me.

Nobody saw what the abuse did to me during the time it happened. Very few people know about the abuse today. The trauma is still inside of me.

Abuse never happens only once. For me, it wasn’t one time. It wasn’t one slap. Sometimes it was only words but the trauma of listening to the same words as I was being abused before made the pain more vivid.

My life as a student wasn’t all pain and abuse. I had happy moments, joyful moments but the trauma was always there. From time to time I even tried to “test” someone to see if I was safe enough with that person, if I wasn’t going to be shoved, or have my hair pulled.

There are too many disabled students being abused in schools, and sometimes the type of abuse is said to be appropriate: restraint, seclusion, even the so-called bear hugs – when so many children don’t like to be touched, this is abuse.

There is a lot of ableist slurs yelled at students – that parents never hear about – that damage the child’s self-esteem.

I think about kids like the one in the link, and I hope they are having the supports, and the love they need. I hope they are able to trust at least some people now.   If they start acting “violently”, there is a greater chance that they will be abused again, with the excuse that they are “out of control”.

I tell my story so that people can start paying attention to disabled students and start questioning the safety of these students.

I tell this story because I don’t want people to feel too comfortable after a child who’s been abused is smiling again. I want people to make sure the smile is one of happiness, not of fear.

I tell this story because I want people to question why disabled students who become “violent” after an abuse are blamed for their abuse.

I want people to learn that abusers need to be punished, and that 30 days in jail is not enough for the life of trauma they inflicted on their victims.